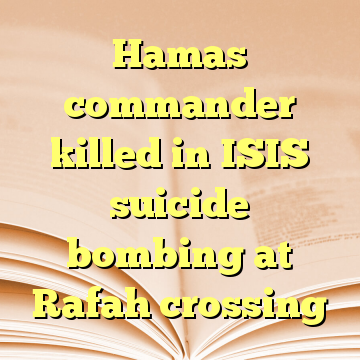 (Worthy News) – A commander in Hamas’s military wing was killed early Thursday in an ISIS suicide bombing at the Rafah border crossing, which connects the Gaza Strip and Egypt.

According to the Gazan Interior Ministry, Hamas forces stopped for a security check two people who were nearing the border crossing from inside the strip when one of them set off an explosion, likely from a suicide belt.

The commander who was killed was identified as 28-year-old Nidal al-Jaafari, who in addition to being a member of the Izz ad-Din al-Qassam Brigades also served in the Hamas security forces. [ Source (Read More…) ]