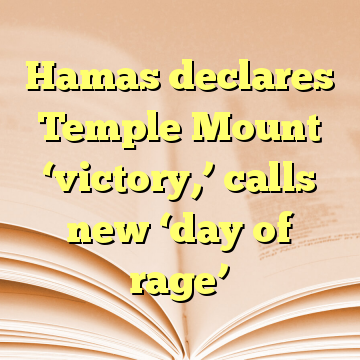 (Worthy News) – Some 2,000 members of the Hamas terror group marched in the Gaza Strip Wednesday to mark “victory” after Israel removed contested metal detectors from entrances to the Temple Mount a day earlier in a bid to calm tensions.

The group also called for a fresh “day of rage” throughout the West Bank on Friday to protest continued Israeli security measures at the site.

The group urged Palestinians to “respond to the ongoing events in order to deter Israel from continuing its violations against our people and holy places,” according to Israel’s Channel 2. [ Source:Times of Israel (Read More…) ]