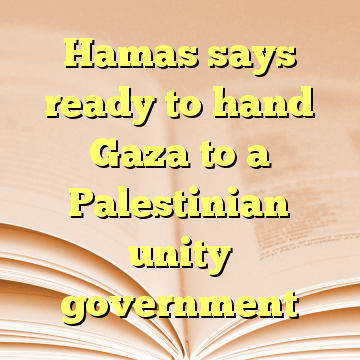 (Worthy News) – Hamas has agreed to dissolve the administration that runs Gaza, it said on Sunday, a major step towards handing control of the enclave to a Palestinian unity government after a decade of bitter rivalry with President Mahmoud Abbas.

The Islamist group, which has ruled Gaza since a brief Palestinian civil war in 2007, said it had taken “a courageous, serious and patriotic decision to dissolve the administrative committee” that runs the territory of 2 million people, and hand power to some form of unity government.

Reunification a decade after Hamas and Abbas’s secular Fatah movement battled for control of Gaza may hinge on whether complex issues related to power-sharing – which stymied reconciliation bids in the past – can be resolved. [ Source (Read More…) ]