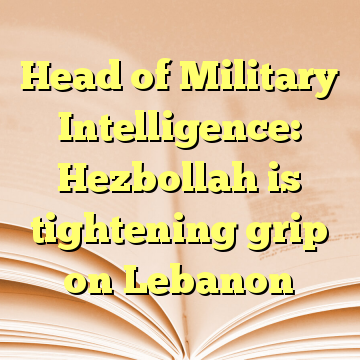 (Worthy News) – The head of the IDF Intelligence Directorate, Maj.- Gen. Herzi Halevi, told UN head Antonio Guterres in Jerusalem this week that Hezbollah is tightening its hold on Lebanon, citing serious and prolonged violations of Security Council Resolution 1701 by the terrorist group.

The IDF has accused the Shi’ite terrorist organization numerous times of violating the resolution that set the terms for ending the 34-day Second Lebanon War fought between Israel and Hezbollah in the summer of 2006.

According to IDF Chief of Staff Lt.-Gen. Gadi Eisenkot, while UNIFIL is helping maintain calm in southern Lebanon, its leadership does not do enough when Hezbollah violates the resolution. Eisenkot has accused Hezbollah of continuing to prepare themselves for war in villages, cities and towns south of the Litani River “arming itself with more lethal and accurate weapons to harm the Israeli home front.” [ Source (Read More…) ]