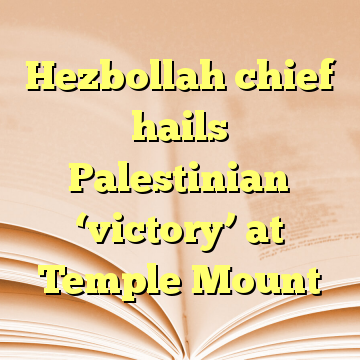 (Worthy News) – The head of the Lebanese terror group Hezbollah called Israel’s removal of metal detectors from Temple Mount entrances a “victory” in a televised speech Wednesday, even as Muslim leaders have said that the move is not enough and vowed to continue protests.

“The resistance salutes and hails the people of Jerusalem, the West Bank and all Palestinians, who have flocked to the Old City in defense of the Al-Aqsa Mosque and have managed to impose a new victory through forcing the enemy to remove its new measures,” Hassan Nasrallah said, according to a report in the Lebanese daily al-Nahar.

The Hamas terror group also called for a “day of rage” for the second consecutive Friday following the attack, though it also portrayed the removal of the detectors as a victory over Israel. [ Source:Times of Israel (Read More…) ]