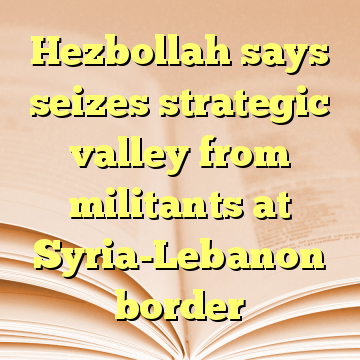 (Worthy News) – Hezbollah said its forces seized a strategic valley from Sunni Muslim militants on Monday, the latest advance in an offensive to oust jihadists from their last foothold along the Syria-Lebanon border.

The Shi’ite Muslim Hezbollah said it had advanced from several directions in the Wadi al-Kheil valley in Juroud Arsal, a barren mountainous border zone that has served as a base for militants linked to al Qaeda and Islamic State.

The advance gave Hezbollah control over what had been “the most important base for Nusra Front” in the area, Hezbollah’s military media unit said in a statement. [ Source:Reuters (Read More…) ]