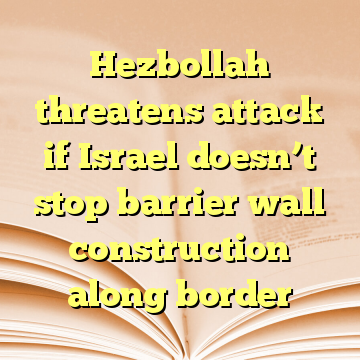 (Worthy News) – Hezbollah sent a threat to Israel this week stating that if the Israeli Defense Ministry does not stop building the barrier wall along the Lebanese border, the terrorist organization will open fire towards Israel. The barrier wall aimed at preventing Hezbollah terrorists from infiltrating into Israeli territory has been under construction for several years. However, Hezbollah only recently expressed its outrage towards the obstacle.

The message exchange began when Hezbollah contacted the United Nations Interim Force in Lebanon (UNIFIL) in order to say that the terrorist organization will not accept the actions being taken over the border. Fearing potential military escalation, UNIFIL sent Hezbollah’s communication to the US and British embassies, who then relayed the message to the Israeli Prime Minister’s Office.

In response, Jerusalem sent its own threatening message making it very clear that Israel is operating within its own sovereign territory in accordance with the UN Security Council resolution that was approved after the IDF completely withdrew from Lebanon in 2000. According to sources in Israel, Hezbollah will pay a “heavy price” if it attempts to escalate tensions in the area, towards which the the IDF will launch a severe retaliation.[ Source: Jerusalem Online (Read More…) ]