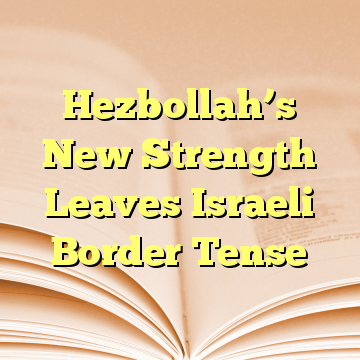 (Worthy News) – Deep in the rugged hills close to the Israeli border, two Hezbollah fighters crouched near a small fire, which heated a teapot. Despite the late-summer sun, they were both wearing full face masks to disguise their identity, because Hezbollah forbids its members from speaking with foreign reporters.

One of the fighters said their purpose there is just to keep an eye on the “Israeli enemy.”

“Any Israeli movement, we will see it,” he said. “This area is all Hezbollah members preparing only for [them] … Whether it’s Israelis or Daesh, we fear no one,” he said, using the Arabic acronym for the Islamic State.

And in fact, Hezbollah is now playing a much larger role in Syria and Lebanon than monitoring Israel. The militia is fighting on behalf of Syrian President Bashar al-Assad in that country’s civil war, and just completed the final phase of a successful operation in conjunction with the Lebanese army to finally clear the Syrian border of ISIS militants, cementing Hezbollah’s image among many residents as protector of Lebanon. [ Source: NBC News (Read More…) ]