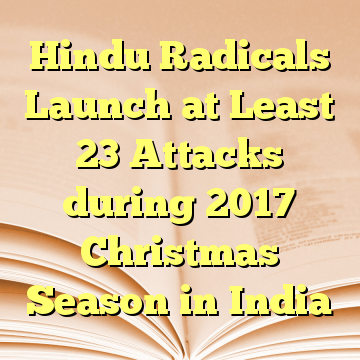 (Worthy News) – International Christian Concern (ICC) has learned that at least 23 religiously-motivated attacks took place during the 2017 Christmas season, including attacks on carolers and open threats against Christian celebrations. The attacks have led to several Christians’ hospitalization and imprisonment. The persecution created such fear among the Christian community that many Christians did not celebrate Christmas this year.

On December 19, an attack occurred in Rajasthan by a radical Hindu group, the Vishwa Hindu Parishad, against a Christian gathering in response to alleged forced conversions. According to Pastor Bansilal Mena, one of the organizers of the event, more than 300 Christians gathered at a community hall to celebrate Christmas, after receiving permission to hold the event. In the middle of the celebration, 20 Hindu radicals barged into the hall along with police personnel and began attacking the Christians, even though the Christians had received permission to hold the event. In addition, Hindu radicals went on stage, pulled wires, and destroyed Christian literature. [ Source: Christian Headlines (Read More…) ]