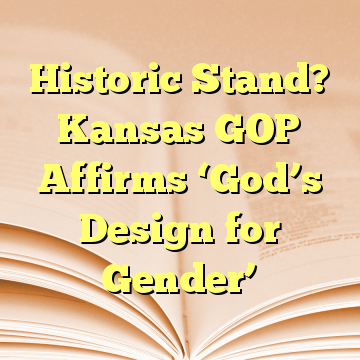 (Worthy News) – The Kansas Republican party has voted to pass a resolution that opposes “all efforts to validate transgender identity” and supports “God’s design for gender as determined by biological sex and not by self-perception.”

At a time when both political parties are using extreme caution in the transgender debate, it may be the first state party to take such a stand says Peter Sprigg, senior fellow for policy studies for the Family Research Council in Washington.

“I hope it is an example that other states will follow,” Sprigg told CBN News. “Increasingly there’s a tendency, even on the part of Republicans, to be scared off if there’s any risk of being accused of discrimination,” he said. [ Source: CBN News (Read More…) ]