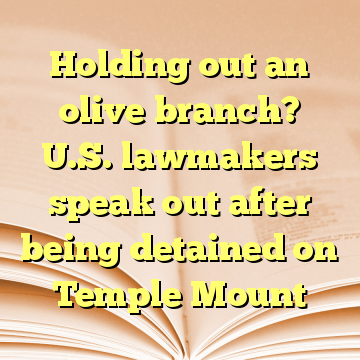 (Worthy News) – U.S. Reps. Scott Tipton (R-Colo.) and David B. McKinley (R-W.Va.) no doubt anticipated an eye-opening experience when they visited the Temple Mount on Thursday as part of their current trip to Israel. So imagine their surprise when they were detained by Israel police after an Islamic Waqf official, which administers the Temple Mount, lodged a complaint against them.

It appears that they violated some unknown rule when Tipton bent down to pick up a broken olive branch off the ground. His movement seems to have agitated the Waqf official who, apparently believing the congressman was bowing as if in prayer, set off the events that followed.

The congressmen, both in their 70s, were physically removed from the Temple Mount by police officers, and frisked and detained for more than a half-hour. They were released without incident. [ Source: JNS (Read More…) ]