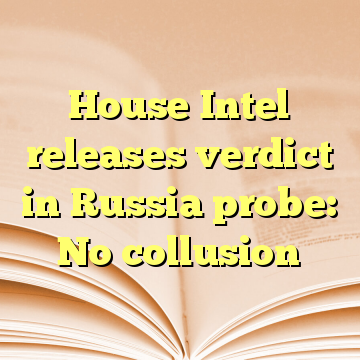 (Worthy News) – The House Intelligence Committee has released findings from its upcoming report on the Trump-Russia affair — and its main conclusion is that it has discovered no evidence of collusion between the Trump campaign and Russia to influence the 2016 presidential election.

“We have found no evidence of collusion, coordination, or conspiracy between the Trump campaign and the Russians,” the committee said in a one-page summary of its findings released Monday afternoon.

In addition, the committee took issue with the intelligence community assessment of Russian motivations in the 2016 election. The committee agrees with the assessment that the Russians did, in fact, try to interfere — the findings cite “Russian cyberattacks on U.S. political institutions in 2015-2016 and their use of social media to sow discord.” But the committee disagrees with the intelligence community judgment that Russian President Vladimir Putin specifically tried to help President Trump win the election. [ Source: Washington Examiner (Read More…) ]