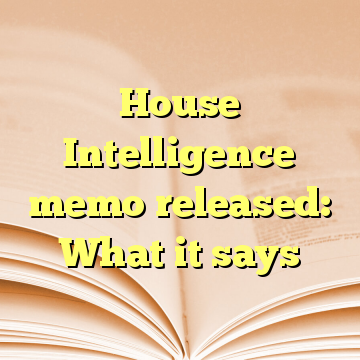 (Worthy News) – The House Intelligence Committee has released its controversial memo outlining alleged abuses of secret surveillance by the FBI and Justice Department in the Trump-Russia investigation. Here are some key points:

* The Steele dossier formed an essential part of the initial and all three renewal FISA applications against Carter Page.

* Andrew McCabe confirmed that no FISA warrant would have been sought from the FISA Court without the Steele dossier information.

* The political origins of the Steele dossier were known to senior DOJ and FBI officials, but excluded from the FISA applications.

* DOJ official Bruce Ohr met with Steele beginning in the summer of 2016 and relayed to DOJ information about Steele’s bias. Steele told Ohr that he, Steele, was desperate that Donald Trump not get elected president and was passionate about him not becoming president. [ Source: Washington Examiner (Read More…) ]