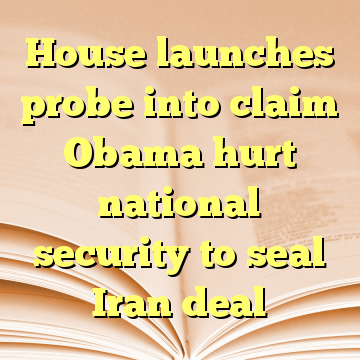 (Worthy News) – Congress will investigate whether the Obama administration undermined its own counterproliferation efforts in order to secure implementation of the nuclear deal with Iran, Politico reported.

The House oversight committee said Friday it had launched an investigation into Politico’s April 24 report that the administration had dropped prosecutions against several Iranian fugitives accused of posing threats to national security, while publicly downplaying the danger posed by Iranians freed in a January 2016 prisoner exchange.

Republican committee leaders Jason Chaffetz and Ron DeSantis said they had asked the State and Justice Departments to provide documents on the various cases referenced in the report by May 19, as well as make officials available for briefings by May 25. [ Source ]