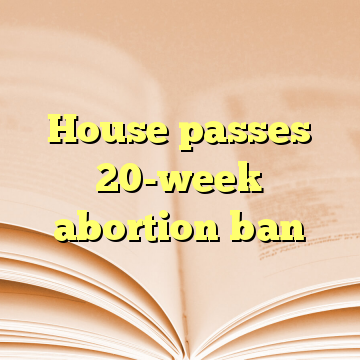 (Worthy News) – The House on Tuesday passed a bill to ban abortion after 20 weeks.

The bill, the Pain-Capable Unborn Child Protection Act, would penalize medical providers who perform abortions after 20 weeks of gestation with up to five years in prison or fines, or both. The bill contains limited exceptions, including when a woman’s pregnancy puts her life at risk and in cases of rape or incest.

The legislation, which passed 237-189, has support from President Trump, who said in a statement of administration policy Monday that if it were to reach his desk his team would recommend he sign it into law.

The bill, however, is likely to be defeated in the Senate, as it needs 60 votes for passage but Republicans hold only 52 seats. A similar piece of legislation met the same fate in 2015. [ Source (Read More…) ]