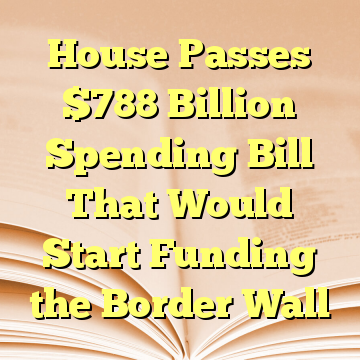 (Worthy News) – The House passed a $788 billion spending bill Thursday that complies with President Donald Trump’s demands to boost the military, reduce clean-energy programs and start funding a wall on the U.S.-Mexico border.

The bill, passed 235-192, would fund the departments of Defense, Energy and Veterans Affairs, the legislative branch and Army Corps of Engineers in fiscal 2018. Republican leaders added $1.6 billion in border-wall funding to win the backing of House conservatives.

The bill, H.R. 3219, has little chance of passing the Senate in its current form. Senate Democrats, whose votes would be needed for passage, intend to block it in the hopes of a deal later this year to increase domestic spending. The bill does, however, set up a bargaining position for House Republicans heading into possible spending talks with Democrats. [ Source (Read More…) ]