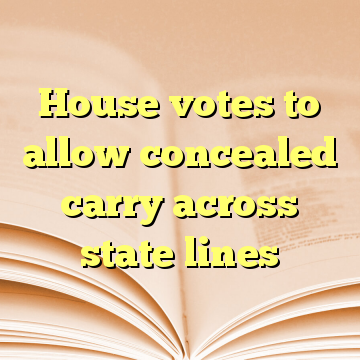 (Worthy News) – The House passed legislation Wednesday that would allow concealed carry permit holders from one state to legally carry their guns in other states.

The legislation is the first gun legislation to be passed by the House in the wake of major mass shootings in both Las Vegas and Texas. While Democrats argued the concealed carry legislation would only add to gun violence, House Judiciary Committee Chairman Rep. Bob Goodlatte, R-Va., said the legislation is the best way “not to infringe on the rights of law-abiding citizens, but to enforce the laws against criminals.” [ Source: Washington Examiner (Read More…) ]