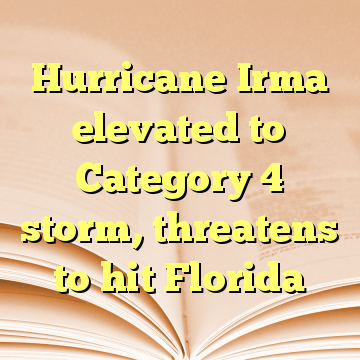 (Worthy News) – The National Hurricane Center has elevated Hurricane Irma to a Category 4 storm with winds as high as 150 miles per hour in the next 24 hours.

There is an “increasing chance” Irma will hit South Florida and the Florida Keys later this week and weekend, the hurricane center said in a 5 p.m. advisory.

Irma could directly hit the British and U.S. Virgin Islands and Puerto Rico by early Wednesday, and hurricane watches have been issued for these areas.

Puerto Rican Gov. Ricardo Rossello on Monday declared a state of emergency in the U.S. territory.

Florida Gov. Rick Scott urged Florida residents on Monday to be prepared for Irma to hit. Scott later issued a state of emergency for all of Florida. [ Source (Read More…) ]