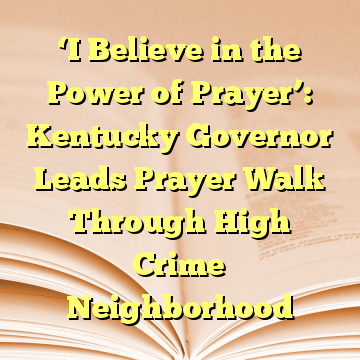 (Worthy News) – Following through on his recommendation for communities to harness the power of prayer, Kentucky Governor Matt Bevin joined residents in Louisville on Friday for a prayer walk.

Facing rising murder rates in the city’s west end, Bevin spoke out at a community meeting in June about the devolving situation on the ground in Louisville. At the time, CBS News reported Louisville Metro Police had investigated a historic 118 criminal homicides in 2016, but, as of May, the 2017 murder rate was on pace to surpass the previous record-setting year.

In an effort to deal with the crisis, Bevin encouraged the people of Kentucky to embrace the “power of prayer” by organizing prayer groups that would regularly take to the streets of high-crime neighborhoods. He urged volunteers to choose a block in their communities and form teams of three to 10 people that could then walk up and down the streets several times a week for the next year. [ Source (Read More…) ]