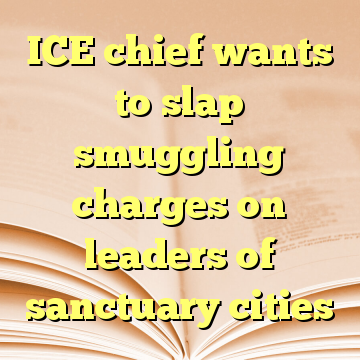 (Worthy News) – The country’s top immigration enforcement officer says he is looking into charging sanctuary city leaders with violating federal anti-smuggling laws because he is fed up with local officials putting their communities and his officers at risk by releasing illegal immigrants from jail.

Thomas Homan, the acting director of U.S. Immigration and Customs Enforcement, also told Americans to expect more work site enforcement targeting unscrupulous employers and more 287(g) agreements with willing police and sheriff’s departments that want to help get illegal immigrants off their streets. Eventually, he said, ICE will break the deportation records of 409,849 migrants set in 2012 under President Obama.

“I think 409,000 is a stretch this year, but if [the Justice Department] keeps going in the direction they’re going in, if we continue to expand our operational footprint, I think we’re going to get there,” he told The Washington Times. “Our interior arrests will go up. They’re going to top last year’s for sure.”