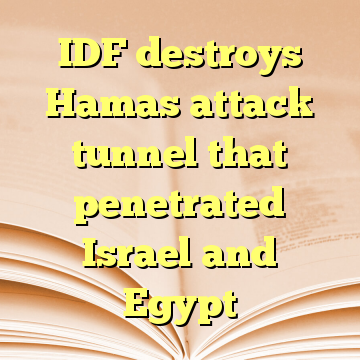 (Worthy News) – The Israel Defense Forces on Sunday said it had destroyed a border-crossing Hamas attack tunnel, the third in recent months, that penetrated hundreds of meters into both Israeli and Egyptian territory from the Gaza Strip, in an airstrike in southern Gaza on Saturday night.

“We completed the destruction of a third terror tunnel,” spokesperson Lt. Col. Jonathan Conricus told reporters early Sunday morning, denying claims made by Hamas that it was a smuggling tunnel.

The tunnel, which was constructed differently from most tunnels in Gaza, began in the city of Rafah and crossed into Israel under the Kerem Shalom Crossing, through which hundreds of trucks ordinarily cross into the coastal enclave with goods from Israel each day, he said. [ Source: Times of Israel (Read More…) ]