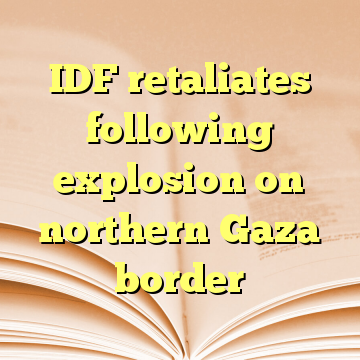 (Worthy News) – Two explosive devices were detonated near the border fence along the northern Gaza Strip early Thursday morning. There were no casualties as the explosion was not near IDF soldiers. In retaliation, the IDF attacked five Hamas positions using tanks, and fired airstrikes at a sixth position.

Palestinian sources reported Israeli airstrikes in the Gaza Strip and the death of two Palestinians.

IDF soldiers recognized suspicious movements while routinely patrolling the area during foggy weather Wednesday night. IDF spokesperson Ronen Manelis assessed that the fog, or the auspices of the ongoing demonstrations by Palestinians by the fence, were what enabled the explosives to be placed in Israeli territory. [ Source: Jerusalem Post (Read More…) ]