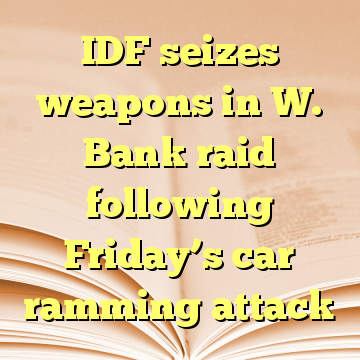 (Worthy News) – The IDF seized illegal weapons, including an improvised rifle, in overnight raids in the West Bank on Saturday night, one day after two soldiers were killed in a terrorist attack near the West Bank settlement of Mevo Dotan. According to the IDF Spokesperson’s Unit, units from the Menashe Brigade continued to operate in the Barta’a area following the car ramming attack near the village of Yabed, in which Captain Ziv Daus, 21, and Sergeant Netanel Kahalani, 20, were killed.

Security forces searched a number of locations throughout the village and found parts of weapons and an improvised rifle.

“IDF will continue to act to prevent terrorism and to protect the security of the residents of the State of Israel,” the army said in a statement. [ Source: Jerusalem Post (Read More…) ]