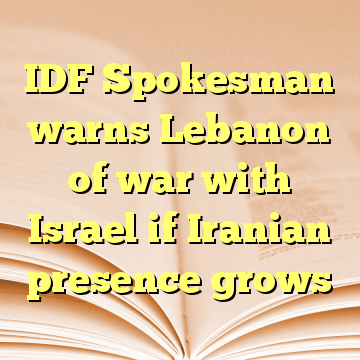 (Worthy News) – IDF Spokesman Brig.-Gen. Ronen Manelis warned in a rare op-ed on a Lebanese opposition website that a war with Israel could break out if Iran develops precision missiles in the country.

“Lebanon has become – both by its own actions and omissions and by a blind eye from many members of the international community – one large missile factory,” Manelis wrote on the Ahewar website.

“It’s no longer a transfer of arms, funds or consultation. Iran has de-facto opened a new branch, the ‘Lebanon branch.’ Iran is here,” he said. [ Source: Jerusalem Post (Read More…) ]