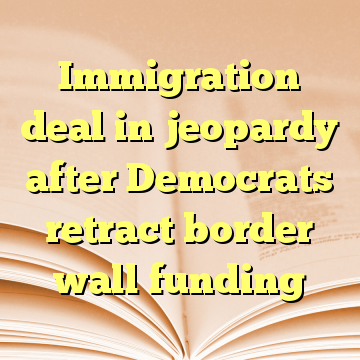 (Worthy News) – Senate Republican leaders said Tuesday a bipartisan bill on immigration that is central to clearing the way for a government spending deal next month is in serious jeopardy now that Democrats seem to be refusing to pay for a southern border wall.

Sen. Chuck Schumer, D-N.Y., on Monday withdrew an offer he made to President Trump last week that in exchange for protecting so-called “Dreamers,” Democrats would agree to $25 billion for border security, including a wall. The Senate minority leader made that offer after Trump invited him to the White House to try to negotiate an accord on federal funding that was hours away from expiring.

Schumer said Tuesday the wall money offer was valid only if Trump came out publicly in favor of the deal, which Schumer believes would have pressured the House and Senate GOP to get behind it. [ Source: Washington Examiner (Read More…) ]