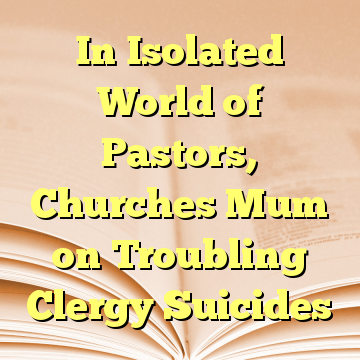 (Worthy News) – An alarming number of pastors have taken their own lives in the last five years. And despite the increasing prevalence of suicide nationally, and the troubling rates at which the epidemic has been affecting certain groups of clergy, many churches remain silent on the issue.

A 2016 data brief from the CDC’s National Center for Health Statistics said from 1999 through 2014, the age-adjusted suicide rate in the United States increased 24 percent from 10.5 to 13.0 per 100,000, with the pace of increase greater after 2006. Suicide rates, the brief said, increased for both males and females and for all ages 10–74. The rates are at the highest levels in nearly 30 years, a federal data analysis showed. Data illustrating this jump shows that in raw numbers the total number of people who died by suicide nationally jumped from 29,199 in 1999 to 42,773 in 2014.

While no one knows for sure the exact number of pastors who are among those who die by suicide, the National Occupational Mortality Surveillance database, which includes records on almost 4 million deaths during the period 1999, 2003–2004, and 2007–2012, provides a studied estimate on how many pastors are affected. [ Source: Christian Post (Read More…) ]