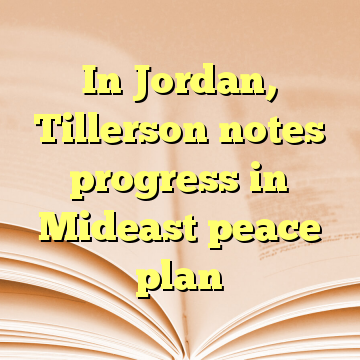 (Worthy News) – The Trump administration’s plan to resolve the Israeli-Palestinian conflict is at an advanced stage, US Secretary of State Rex Tillerson said on Wednesday in Jordan as part of his weeklong regional visit.

“It’ll be up to the president to decide when he feels it’s time and he’s ready to put that plan forward,” he said. “I will say it’s fairly well advanced.”

Tillerson sidestepped speculative questions as to whether US President Donald Trump planned to unveil that plan in the coming months. “I don’t want to get in front of the president or his team that’s been working on that,” he told reporters. [ Source: Jerusalem Post (Read More…) ]