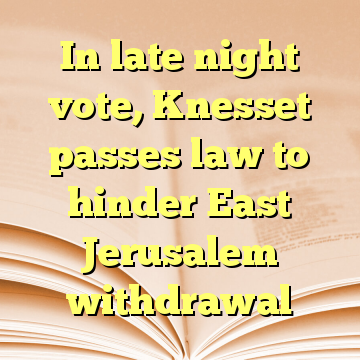 (Worthy News) – Lawmakers approved a bill in the early hours Tuesday that requires a special two-thirds majority vote in the Knesset to relinquish any part of Jerusalem to the Palestinians under a future peace accord.

The bill passed its second and third readings in a late night session by a majority of 64 in favor, 51 against, and one abstention.

The bill, which was proposed by Jewish Home MK Shuli Moalem-Refaeli and had the coalition backing, was designed to make it much harder to divide the city that Israel claims as its undivided capital. The Palestinians claim East Jerusalem as a capital of a future state. [ Source: Times of Israel (Read More…) ]