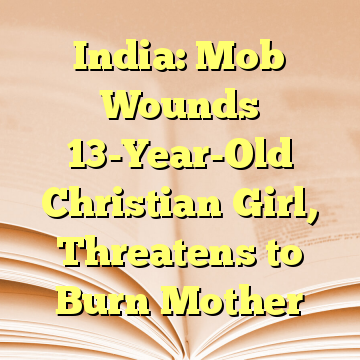 (Worthy News) – Tribal animists upset that Christians tried to bury one of their dead in a village in eastern India seriously injured a 13-year-old girl and others who tried to protect a Christian woman the villagers threatened to burn alive.

On Feb. 26 Christians in Chitrangapalli, Tamguda village, were about to bury the body of a 3-year-old girl who had died of natural causes in Odisha’s state’s Malkangiri District, when villagers reached the field where they were performing last rites. The mob insisted they would not allow a Christian to be buried in their village, even though the burial site was on land owned by one of the Christians, area sources said.

They demanded that the Christians take the body outside the village for burial. After the land owner argued that he was free to bury his dead on his land, the villagers left, only to return at midnight with weapons. [ Source: Morningstar News (Read More…) ]