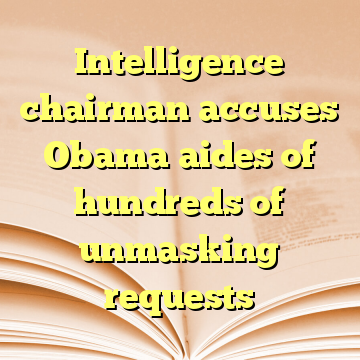 (Worthy News) – The chairman of the House Intelligence Committee is accusing top political aides of President Obama of making hundreds of requests during the 2016 presidential race to unmask the names of Americans in intelligence reports, including Trump transition officials.

Intelligence Chairman Devin Nunes (R-Calif.), in a letter to Director of National Intelligence Dan Coats, said the requests were made without specific justifications on why the information was needed.

“We have found evidence that current and former government officials had easy access to U.S. person information and that it is possible that they used this information to achieve partisan political purposes, including the selective, anonymous leaking of such information,” Nunes wrote in the letter to Coats. [ Source:The Hill (Read More…) ]