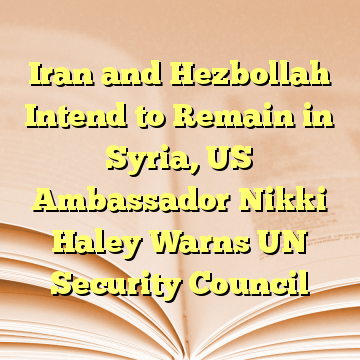 (Worthy News) – The US Ambassador to the UN, Nikki Haley, eviscerated Iran’s rulers before the Security Council on Wednesday as the global body debated the ongoing civil war in Syria.

Haley described President Bashar al-Assad’s regime in Damascus as “a front for Iran, Hezbollah, and their allies to advance the irresponsible and dangerous agenda for the Middle East.”

“On every front of this conflict, we find fighters imported by Iran from Lebanon, Iraq, and Afghanistan,” Haley told the Security Council. “When we see the Assad regime starving civilians in eastern Ghouta or pummeling schools and hospitals in Idlib, we see advisers from Iran and Hezbollah helping direct those atrocities.” [ Source: Algemeiner (Read More…) ]