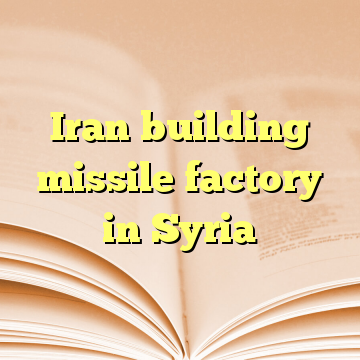 (Worthy News) – A report on Channel 2 on August 15 provided images of a military construction site from an Israeli satellite near Qalaat Marqab. The report said this is likely a factory to build long-range missiles. The area the factory is constructed in near the border of the Tartus and Latakia governorates is one that is closely linked to other military facilities of the Syrian regime and its allies. These include a Russian naval base at Tartus and Khmeimim air force base to the north, which is also allegedly used by Russia and the Iranians.

The report of the Iranian missile factory in Syria comes in the context of Israel’s recent warnings in June and July that Iran was attempting to establish bases in Lebanon and Syria.

Iran’s parliament also approved a bill on August 13 to increase spending on ballistic missiles by $260 million. In May, US lawmakers Peter Roskam and Ted Deutch expressed concern about “a permanent Iranian military base in Syria” in a May 25 letter to Secretary of State Rex Tillerson and Secretary of Defense James Mattis.

“The Islamic Republic seeks to solidify its access to the Mediterranean Sea by building a permanent seaport and constructing numerous military installations throughout the country.” [ Source (Read More…) ]