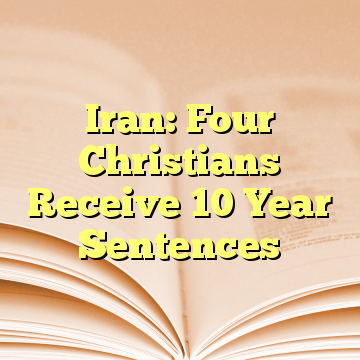 (Worthy News) – A judge in Iran has sentenced four Christians to 10 years imprisonment each for engaging in missionary activities and “conducting activities against national security.”

Judge Ahmedzadeh handed down the sentences in the case involving Iranian national Nasser Navard Goltape, and Yusif Farhadov, Eldar Gurbanov and Bahram Nasibov from the Republic of Azerbaijan during a hearing held on 23 May 2017. However, the judgement was not communicated to them until 12 June. Although the men are appealing the sentence, local sources are pessimistic about the outcome, despite the lack of evidence against them, as the authorities appear determined to use the case to make a punitive statement.

The four men were arrested on 24 June 2016, after traveling to Tehran on an informal visit to their Christian friends. They were confined in Evin Prison, where they initially spent around two months in solitary confinement enduring regular interrogation, before being moved to Ward 350. They were released on bail on 29 October 2016, and the three Azeris were allowed to return to their country on 7 November 2016, having paid the full bail amount. The Azeri Christians may forfeit bail by not returning to Iran; however, Mr Navard Goltape does not have this option. [ Source ]