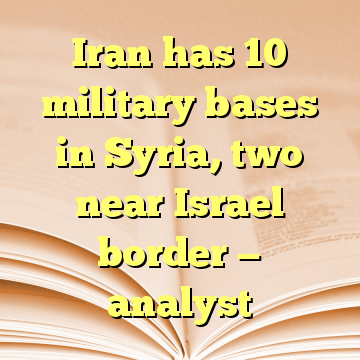 (Worthy News) – Iran operates 10 military bases in Syria and is training militias loyal to President Bashar Assad’s regime for a possible battle with Israel, with two key facilities located near the border with Israel, an analyst for an American think tank said in an article published Monday.

Up to 20,000 fighters from various militias throughout the war-torn country have been trained by Iranian military personnel, giving Tehran its “true muscle” in Syria, according to the Monday report in The New York Times.

Israel has been warning for years that Iran is seeking to entrench itself militarily in Syria. According to Israeli political and military assessments, Tehran, which has shored up Assad in the Syrian civil war, has been working to create air and naval bases in Syria, from which it can arm the Lebanon-based terror organization Hezbollah and other Shiite groups, as well as carry out attacks of its own against the Jewish state. [ Source: Times of Israel (Read More…) ]