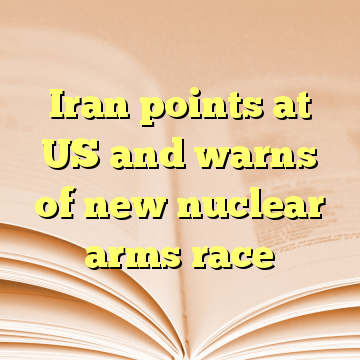 (Worthy News) – Iran’s deputy foreign minister pointed at the United States in warning on Tuesday that a new nuclear arms race and new competition to modernize nuclear weapons are starting.

Abbas Araghchi made the comments during a high-level meeting of the U.N. General Assembly to promote International Day for the Total Elimination of Nuclear Weapons, calling that goal “a legal, political and moral responsibility.”

But, he said, despite the cessation of the nuclear arms race for some years, “recently we hear (an) alarming announcement by a nuclear-weapon state that it intends to continuously strengthen and expand its nuclear arsenal to ensure its place ‘at the top of the pack.’”

This was a clear reference to U.S. President Donald Trump’s comment in February that “a dream would be that no country would have nukes, but if countries are going to have nukes, we’re going to be at the top of the pack.” [ Source: Washington Times (Read More…) ]