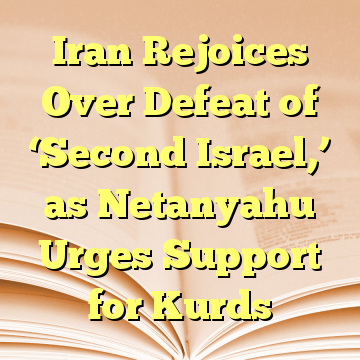 (Worthy News) – The chief of staff to the Iranian regime’s “supreme leader” said on Tuesday that a US-Israeli “plot” to create a “second Israel” in Iraqi Kurdistan had been thwarted through the seizure of Kurdish territory by Iranian-backed forces over the last week.

Mohamadi Gulpaygani, who serves as chief of staff to Ayatollah Ali Khamenei, singled out both his boss and Gen. Qassem Soleimani, commander of the Quds Force of the Islamic Revolutionary Guard Corps (IRGC), for special praise.

“The United States and Israel had plotted to create a second Israel in the Kurdistan Region, and it was shameful to wave the Israeli flag there,” Gulpaygani said, referring to the frequent display of Israeli flags at Kurdish independence rallies prior to the September 25 referendum in which 93 percent of voters supported an independent Kurdistan. [ Source: Algemeiner (Read More…) ]