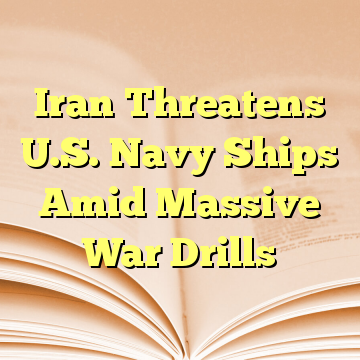 (Worthy News) – Iranian military leaders claimed Monday that they threatened two American-led vessels in international waters amid a series of new war drills being carried out by the Islamic Republic, according to regional reports and U.S. military officials who confirmed to the Washington Free Beacon contact with the Iranian vessels.

As Iran carries out a several days long series of war drills in the Sea of Oman, off the country’s southern border, military leaders claim to have warned off at least two vessels led by U.S. coalition forces in the region.

U.S. military officials confirmed being in contact with Iranian forces, which is just the latest in a series of provocative interactions between the Iranian military and United States. [ Source: Washington Free Beacon (Read More…) ]