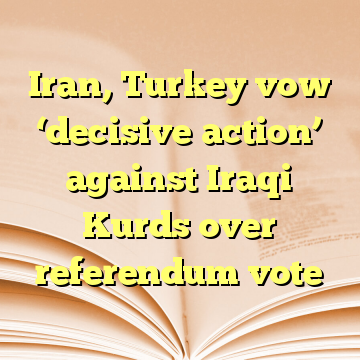 “As far as we are concerned, Iraq is one single country. We do not accept any geographical changes,” Mr. Rouhani said during a joint press conference with Mr. Erdogan in Tehran. The Turkish president was in Iran as part of a diplomatic visit focusing on the regional response to the Kurdish referendum vote in Iraq.

Mr. Erdogan called the Sept. 25 vote, which could pave the way for members of the Kurdish Regional Government to secede from Iraq over the next two years, “an illegitimate referendum” threatening regional stability in the Middle East. [ Source: Washington Times (Read More…) ]