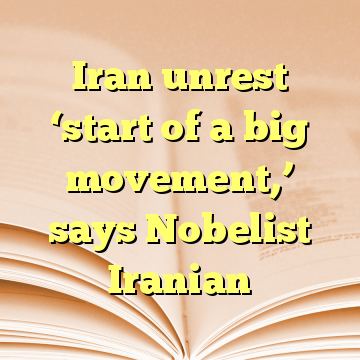 (Worthy News) – The unrest in Iran is just “the beginning of a big movement” that could be more widespread than the demonstrations of 2009, the Nobel Peace Prize-winning Iranian lawyer Shirin Ebadi said in an interview Sunday.

“I think the protests are not going to end soon. It seems to me that we are witnessing the beginning of a big protest movement that can go well beyond the Green wave of 2009. It would not surprise me if it becomes something bigger,” said Ebadi to the Italian newspaper La Repubblica.

A third night of unrest in Iran saw mass demonstrations across the country in which two people were killed, dozens arrested and public buildings attacked. [ Source: Times of Israel (Read More…) ]