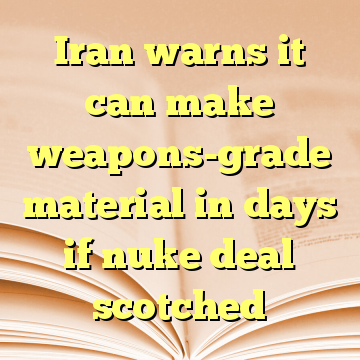 (Worthy News) – Iran’s atomic chief warned Tuesday the Islamic Republic needs only five days to ramp up its uranium enrichment to 20 percent, a level at which the material could be used for a nuclear weapon.

The comments by Ali Akbar Salehi to Iranian state television come as US President Donald Trump repeatedly has threatened to renegotiate or walk away from the 2015 nuclear deal.

Salehi’s warning, along with recent comments by Iranian President Hassan Rouhani, show Iran is willing to push back against Trump while still acknowledging they want to keep the deal, which lifted crippling economic sanctions on the country.

“If there is a plan for a reaction and a challenge, we will definitely surprise them,” said Salehi, who also serves as one of Rouhani’s vice presidents. “If we make the determination, we are able to resume 20 percent-enrichment in at most five days.” [ Source (Read More…) ]

Iran’s top nuclear negotiator, Abbas Araghchi, said this week that if Iran decides to resume enriching uranium to levels prohibited by the new nuclear deal, it could begin to do so in one day’s time.

Critics of the deal, especially in Congress, want any final agreement to force Iran to stop enriching uranium altogether and dismantle its enrichment program. The interim agreement requires Iran to suspend the enrichment of uranium at 20 percent levels and downgrade their existing stockpile of highly-enriched uranium to lower levels. But Araghchi said in the interview that the enrichment suspension is quickly reversible if Iran decides to pull out of the agreement.

“We can return again to 20 percent enrichment in less than one day and we can convert the [nuclear] material again. Therefore the structure of our nuclear program is preserved,” said Araghchi, in a broadcast which was independently translated for The Daily Beast. “Whenever we feel the other side is not following through with its commitments, whenever we feel there are other motives involved, whenever—now, say, under pressure from Congress or something else—they take action against their commitments, say put in place new sanctions, we will immediately revert to the current status quo. And we will again continue our nuclear program in the form that it is today.”

“I can say definitively that the structure of our nuclear program will be exactly preserved. Nothing will be put aside, dismantled or halted. Everything will continue, enrichment will continue,” Araghchi said. [ Source (Read More…) ]