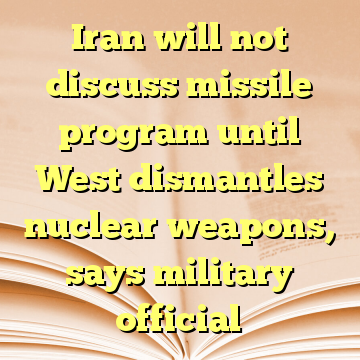 (Worthy News) – Iran will not conduct talks on its ballistic missile program until the US and European countries dismantle their nuclear weapon arsenal, said an Iranian military official on Saturday. Speaking to Iran’s state-run IRNA news agency, the official claimed that the US’ criticism of Tehran’s program was driven by its own failures in the region.

“What Americans say out of desperation with regards to limiting the Islamic Republic of Iran’s missile capability is an unattainable dream,” said Masoud Jazayeri, Iran’s Deputy Chief of Staff. “If our country’s defense capabilities had been affected by some political negotiations and diplomacy, we would not have been in the position we are today.”

Jazayeri also addressed the “Israeli occupation,” and told reporters: “For the Islamic Republic of Iran, Israel is considered illegitimate and occupier of the Palestinian territory and the Holy Quds and Israel is going towards total destruction.” [ Source: Jerusalem Online (Read More…) ]