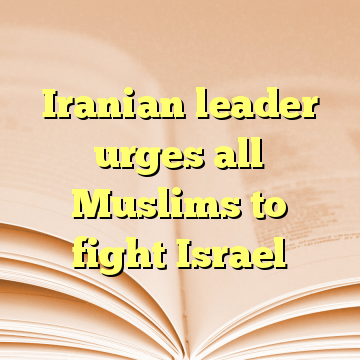 In a letter to the International Union of Resistance Scholars, a group that has convened anti-Israel gatherings in the past, Khamenei wrote that the “unforgettable responsibility” for removing Israel “rests upon the shoulders of the entire Muslim world.”

The letter, which appears in English translation on Khamenei’s official website, is addressed to the union’s chairman, Lebanese Sunni cleric Sheikh Maher Hamoud. Hamoud, who hails from Sidon in southern Lebanon, advocates an end to the Sunni-Shiite rift and a refocusing of Muslim attention on the Palestinian cause. [ Source: Times of Israel (Read More…) ]