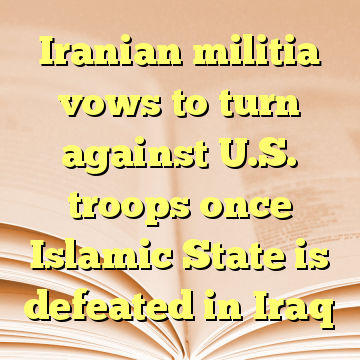 (Worthy News) – The U.S. military is keeping a wary eye on Iran’s most violent proxy militia in Iraq, which has vowed to start killing Americans again once the Islamic State is expelled.

With the Islamic State’s defeat in Iraq coming closer — the U.S. estimates that the once 25,000-strong terrorist group is down to a few thousand followers at most holding only pockets of resistance — the danger from the Hezbollah Brigades is fast approaching.

A commander in the Shiiite battalion, also known as Kata’ib Hezbollah (KH) and the largest and most ruthless Iranian-trained militia fighting in Iraq and Syria, warned Americans on Sunday that they must leave Iraq or face a new war, Iran’s Fars News Agency reported. [ Source:Washington Times (Read More…) ]