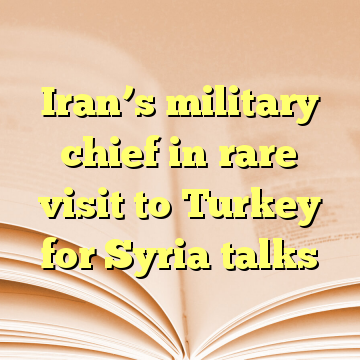 (Worthy News) – Turkish and Iranian military leaders held talks on Wednesday over cooperation in the Syrian conflict and counter-terrorism, officials said, during a rare visit to NATO-member Turkey by the Islamic Republic’s military chief of staff.

Turkey’s ties with Washington have been strained by US support for Kurdish fighters in Syria, and the visit by Iranian General Mohammad Baqeri is the latest sign that Ankara is increasing cooperation with other powers such as Iran and Russia.

Baqeri met his Turkish counterpart on Tuesday and Turkey’s Defence Minister Nurettin Canikli on Wednesday in what Turkish media said was the first visit by an Iranian chief of staff since Iran’s 1979 Islamic revolution. [ Source (Read More…) ]