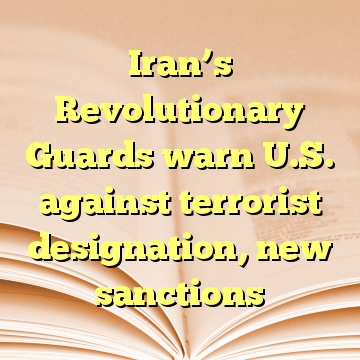 (Worthy News) – A senior commander in Iran’s Revolutionary Guards warned the United States on Monday that if it designated the group a terrorist organization and applied new sanctions its action could be perilous for U.S. forces in the region.

In Mid-June the U.S. Senate voted for new sanctions on Iran over its ballistic missile program and other activities not related to the international nuclear agreement reached with the United States and other world powers in 2015.

“Counting the Revolutionary Guards the same as terrorist groups and applying similar sanctions to the Revolutionary Guards is a big risk for America and its bases and forces deployed in the region,” said Armed Forces Chief of Staff Major General Mohammad Baqeri, according to Sepah News, an official news site of the Guards. [ Source: Reuters (Read More…) ]