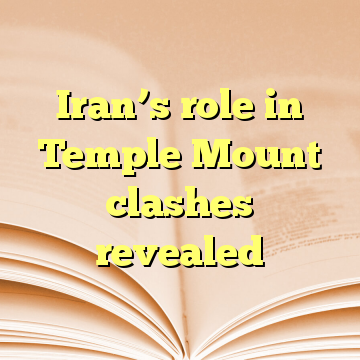 (Worthy News) – The recent clashes in and around the Temple Mount were fueled in part by the Iranian government, Palestinian sources told Israel Hayom this week.

The clashes erupted after Israeli authorities installed metal detectors at entry points to the site in response to a deadly terrorist attack there on July 14. Many Muslims locally and around the world viewed the Israeli security measure as a bid to usurp control. Israel insisted the measure was meant only to prevent further attacks, and removed the devices less than two weeks later.

According to the Palestinian sources, tens of thousands of Muslim protesters received prepackaged meals along with notes in each one citing a famous quote attributed to 1979 Iranian Revolution leader Ayatollah Ruhollah Khomeini: “With the help of Allah, Palestine will be liberated! Jerusalem is ours.” The note also depicted the Dome of the Rock and the Palestinian flag. [ Source (Read More…) ]