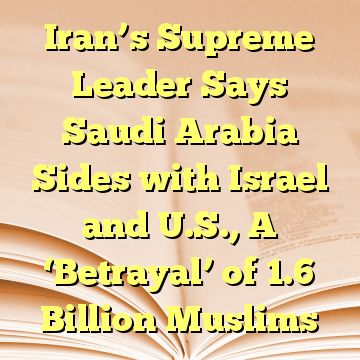 (Worthy News) – Iranian supreme leader Ayatollah Ali Khamenei has accused Saudi Arabia of double-crossing the Palestinians and betraying 1.6 billion Muslims by siding with the U.S. and Israel on regional affairs.

Despite Iran and Saudi Arabia’s decades-long proxy war of influence in the Middle East, revolutionary Shiite Muslim cleric Khamenei said Tuesday that his country was “ready to act brotherly even with those among the Muslims who were once openly hostile to Iran.”

He called on Muslim countries to unite against the U.S. and Israel’s recognition of Jerusalem as the capital of Israel, a diplomatic earthquake that disregarded Palestinian claims to the city and upended an international consensus on its status. [ Source: Newsweek (Read More…) ]