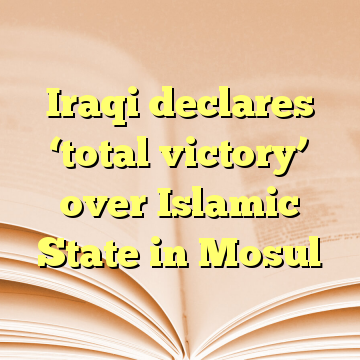 (Worthy News) – Iraq on Monday declared “total victory” over the Islamic State group in Mosul, retaking full control of the country’s second-largest city three years after it was seized by extremists bent on building a global caliphate.

“This great feast day crowned the victories of the fighters and the Iraqis for the past three years,” said Prime Minister Haider al-Abadi, flanked by his senior military leadership at a small base on the edge of the Old City, where the final battles for Mosul unfolded.

Al-Abadi alluded to the brutality of the battle for Mosul — Iraq’s longest yet in the fight against IS — saying the triumph had been achieved “by the blood of our martyrs.” [ Source: Fox News ]