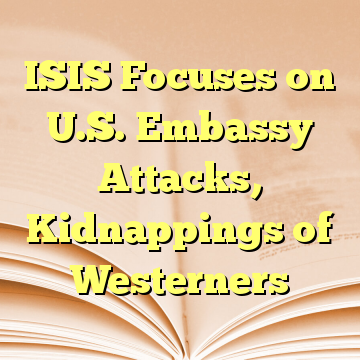 (Worthy News) – The weekly Islamic State newsletter that usually focuses on internal headlines within remaining caliphate territory devoted a section to discussing attacks on U.S. embassies and kidnappings of westerners in locales not usually touched by the terror group.

ISIS has previously used the briefs section in al-Naba to discuss the Las Vegas shooting, which they’ve claimed as their own while authorities said no extremist links have been found, and the California wildfires, in which they’ve highlighted the tactic of arson without claiming responsibility.

In the latest issue of the 12-page newsletter distributed online, ISIS begins with a foiled plot in Jordan in which the terror group targeted Israeli businessmen making regular visits to a clothing factory and the U.S. Embassy in Amman. Jordan’s Al-Rai newspaper reported Tuesday that the plot was uncovered by Jordanian security forces in November, resulting in 17 arrests. Other targets included a nightclub, a church, the French Institute of Jordan, Phosphate Company tunnels, and the Ro’ya TV network. [ Source: PJ Media (Read More…) ]