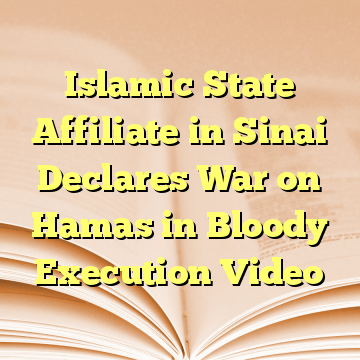 In the video — published by the SITE Intelligence Group, which monitors Islamic extremism online — a man who is accused as being a Hamas collaborator is executed by Islamic State’s Sinai branch.

“[Hamas] uses its smuggled weapons to empower that which was not revealed by God. It also fights supporters of the Islamic State in Gaza and the Sinai and prevents the migration of these supporters from Gaza to the Sinai,” states an Islamic State terrorist in the video. [ Source: Algemeiner (Read More…) ]